This July, 20 high school students attended a week-long interactive virtual camp designed for young women interested in exploring the ever-expanding field of cybersecurity. Camp participants worked in teams to design their own projects while getting hands-on experience with popular cybersecurity tools and technology. This summer was the camp’s second year, with attendees joining from around the world, including campers from the United States, India, France, and Japan.

The Women’s Cybersecurity Immersion Camp (WCIC) is the creation of Jenni Muñoz who proposed and led it while a senior earning her BS in Computer Science from Luddy. Throughout her education, she performed leadership roles in groups from Girls who Code, to the National Society of Black Engineers. As an undergraduate, Muñoz was a SPICE REU student working on a variety of projects, including creating a carbon footprint application allowing individuals to better measure and understand their yearly carbon footprint. She was the Founder and President of IU’s chapter of Women in Cybersecurity (WiCys) when she and fellow members proposed the WCIC camp and ran it in its first year, Summer 2021, with great success.

With Muñoz’s graduation and subsequent hiring as an Information Security & Risk Analyst for Northern Trust Corporation, the mantle of running the camp was passed to IoT House/SPICE project manager, Joshua Streiff, to run for 2022. This year’s camp kept the proven wide-spectrum cybersecurity immersion focus and centered around IoT technologies and the process of ethical hacking. 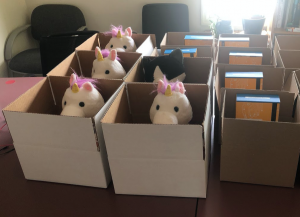 In order to provide students a hands-on experience in their lessons and labs, students were sent boxes containing real world IoT items and gaming materials. Each day an item would be removed from the box and used in their study – turning high school students into threat modeling researchers hacking devices for vulnerabilities, which they would then propose mitigations for. Guest speakers made up of Luddy Professors and Alumni joined throughout the week to give presentations on cybersecurity’s past, present, and future.

During that week camper groups also were tasked with picking a particular problem in the realm of cybersecurity, researching it, and giving a group presentation on the last day of camp. Student presentations included reports on breaches to facebook, twitter, and the NSA; as well as subjects like crypto hijacking, financial identity theft, self driving car security, and social engineering attacks.

WCIC will return in the summer of 2023 and continue as a virtual camp with worldwide reach. Next year’s camp is planned to shift its center to cybersecurity and Artificial Intelligence (AI) and expects to see both new and previous students attend for our third exciting year of unique cybersecurity education.